“Once more with synergy!” facetiously cries a cynical and formidable adversary of unbridled capitalism, Naomi Klein, in her corporate-weary manifesto scrutinizing the branded world in which we live, No Logo. This post is basically about that.

One of our dear clients, Michael, recently picked up a Gibson SG on the cheap – perhaps because the seller, too, recognized a grave aesthetic flaw in the guitar – and brought it straight to us. Needless to say, Michael wasn’t really digging the egregious designer logo plastered across the top of his otherwise awesome SG, so he wanted to have the guitar re-finished and have us customize and install a new pick guard.

Although we do minor finish work such as lacquering repaired headstocks and newly re-surfaced maple fretboards and things of that nature, we’re not – for a variety of reasons – setup for re-finishing entire guitars in-house. So we sent it to Pat Wilkins in Los Angeles, because he’s the best there is at what he does.

Once we received the guitar back from Pat, I got to work on the aftermarket pick guard. The one we procured was designed for a single-pickup SG, like this guitar, but it was made to fit a different control layout. So I notched the top of it to tightly hug the end of the fretboard, and re-shaped the bottom flare to stylishly frame the volume knob. Once the general shaping was done I beveled the newly formed edges to match the rest of it, then it was just a matter of re-assembling all of the hardware, re-wiring the electronics and performing a complete setup on the guitar.

We’re really pleased by how well this job came out, and Michael is now free to express corporate establishment subversion through the rebellious power of rock and roll, or something like that… 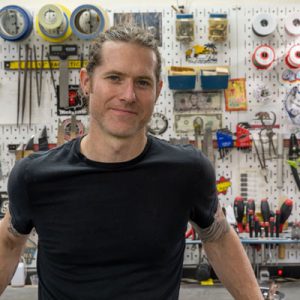 Permanent link to this article: https://www.strangeguitarworks.com/re-finishing-defaced-sg/